When is the “Right Time” to have your dog or cat put to sleep? Part II

When is the “Right Time” to have your dog or cat put to sleep? Part II

So let’s talk a bit about dogs and their “Quality of Life”.

We are talking about quality of life – and when is the right time to call it a day.

Titan is a 11 year old Rottie. Handsome isn’t he. 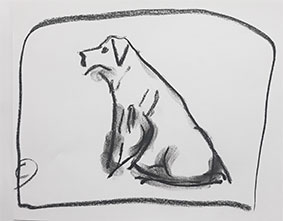 Let’s assume we agree that we don’t want him to suffer. That MUST be our priority right?

Sounds easy but is almost impossible to get right.

So when did he start to suffer? Well, he started to suffer 18 months ago – just a bit. But to consider putting him to sleep then would have been absurd.

So what we have to do is try to create a balance. Some kind of moment when we judge that his suffering exceeds his joy. And dogs are all about joy. The joy of chasing a squirrel, or barking at the postman, or doing a job like catching a ball, or guarding the garden.

So we have a balance:

On the left is Titan’s pain and mobility / continence issues. On the right is joy and his ability to do his job of being Titan.

As each day goes past, the left goes up, the right goes down.

As far as I am concerned. the moment there’s more left than right – more bad than good – then I think the time is right.

There’s no light at the end of the tunnel for Titan – no miracle waiting around the corner.

But the big problem for Titan is that the bad only goes up a little bit each day. So it’s easy for his owners to ignore the fact that the balance has gone over.

Titan’s owners are waiting for one big event that will help them make the decision that the time has come:

Perhaps a major fall. Or he starts to growl when someone comes too close because of the pain. Or he starts to be sick. Or his legs give up altogether and he can’t support his weight. Or he becomes faecally incontinent.

These notable events make it much easier for Titan’s owners to make the phone call to the vet – “Titan needs to be put to sleep.”

But waiting for a crisis means Titan’s owners are making that phone call months too late.
Titan has been experiencing more bad than good for 4 or 5 months. Which isn't good.

What if we are too early? What if he’s not ready?

I read a quick and easy quote when I was setting up Quietus Vet. Can’t remember where – but it goes:

Better a month too early than an hour too late.

If Titan’s owners had decided to have him put to sleep 3 months after the balance changed for the worse, then he would only have had 3 months suffering. If they chose a month earlier, that’s a month less unnecessary suffering. This is all good for Titan. His owners didn’t want him to suffer. As soon as the balance goes over to the bad side, then the time is right.

Next we are going to look at cats -  now, they are difficult:

When is the “Right Time” to have your dog or cat put to sleep? Part III

Contact Paul when you have made your decision, or you simply need to talk about you and your pet.